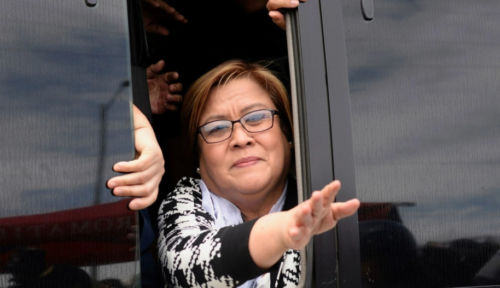 Candidates in the May 2022 national elections should commit to the immediate release of prisoner of conscience and Philippine Senator Leila de Lima, who marks her fifth year in arbitrary detention on politically motivated charges this week, Amnesty International said today.

“After the killings and impunity that were a hallmark of the Duterte administration’s so called ‘war on drugs’, human rights must feature front and centre in the election campaign agendas of all candidates. This includes the immediate and unconditional release of Senator de Lima, who continues to speak out against grave violations despite five years of unjust detention,” Rachel Chhoa-Howard, Amnesty International’s Philippine researcher, said.

Apart from Senator de Lima’s release, Filipinos – and indeed the world – look to the next government to address the pervasive culture of impunity in the country. The new government must end all human rights violations, work toward accountability, and provide justice to victims and their families.

“Senator de Lima has spent the last five years in arbitrary detention. Her continued detention shows the awful lengths the Philippine government will go to silence its critics. Senator de Lima’s persecution – alongside the killings and other human rights violations under the ‘war on drugs’ and against human rights defenders – will forever be a stain on the government’s record. This situation must not be allowed to continue under the next government.”

Senator de Lima was one of the first politicians to be targeted by the authorities after Duterte was elected in June 2016. The attacks against her began when, as the then Chairperson of the Senate Committee on Justice and Human Rights, she sought to investigate extrajudicial executions and other serious human rights violations under the so-called “war on drugs”.

The Department of Justice filed three drug-related cases against her on charges of illegal drug trading, which it later changed to conspiracy to commit illegal drug trading. All three cases have been marked by undue delays, including the repeated failure of prosecution witnesses to show up in court and changes in judges handling one case. On 17 February 2021, the court ordered the dismissal of one case; the two others are ongoing.

Amnesty International believes that Senator de Lima is a victim of political persecution, and that the charges against her clearly stem from her criticism of President Duterte’s ‘war on drugs’, which has resulted in the extrajudicial execution of thousands of suspected drug offenders and other human rights violations.

There has largely been no justice or accountability for the victims and their families, save for the case of 17-year-old Kian delos Santos where three policemen were found guilty of murder in 2018, over a year after his death.

The unjust detention of Senator de Lima continues under the broader context of increasing impunity for human rights violations in the country, including killings, threats and harassment of political activists, human rights defenders, members of the media, and other targeted groups.